You are here: Home1 / Fresh Prints Art Blog2 / Musings and Other Stuff3 / Skeletons In My Closet – The Fisher Diaries – Part 3

Skeletons In My Closet
The Fisher Diaries – Part 3

Rediscovering Fascination Before the Cleaning Process

Up until this point, this project has been mostly hands-off and required nothing more than observation and education. First, I observed the fisher when I initially collected it and recorded as many details as I felt were necessary. I contacted other people who specialize in articulating skeletons to ask questions and glean as much knowledgeable information as possible about this process. I put that knowledge to work and chose the best method to achieve my goal – an intact skeleton that I could articulate and study.

When I collected this skeleton, I was almost immediately put back in touch with rediscovering my fascination with anatomy. Every time I handle a bone, my eyes take in the details of its structure, while my mind sorts out the details of its function. It is an interesting exercise to tie a single bone into how it plays a role in the actual life of the animal by studying the anatomy and structure of that one bone and how it relates to the rest of the skeleton. This is a jigsaw puzzle that I am looking forward to putting back together.

I will say that the decomposition box method that Walter Varcoe recommended using with smaller specimens worked extremely well. Before the cleaning process could begin, the skeleton had to be removed from the decomposition box. The entire fisher skeleton was carefully removed from the decomposition box, taking extra care to collect each section of the body and place it in a clearly labelled Ziploc bag (each forelimb, each hindlimb, ribs and sternum, vertebrae and skull). Each bag was labelled to make the future job of articulation much easier. Keeping each limb separated from the others helps avoid mixing up bones, especially the smaller bones of the wrists and feet.

The collection period was also when it will become very clear why it is so important to arrange the specimen so that the limbs are separate from each other and not laying on top of one another. As the body of the animal goes through the decomposition process, things tend to settle and if the limbs are stacked on top of each other the bones will end up in a pile which could prove difficult to sort out. This was one benefit to not skinning the carcass since the remaining fur kept them separated from each other.

I did not have an extra set of hands available that day, but I would recommend it in the future so that the bones can be photographed in situ and while being collected for future reference. I was wearing gloves and it was going to be very inconvenient to have to keep removing them to take photos and then put them back on. In the future, I’ll find another fellow anatomy obsessed illustrator to photograph the collection process.

All Boxed Up and Ready To Clean

I consulted The Bone Builder’s Notebook by Lee Post for information about the cleaning process to prepare the skeleton for articulation. Each bag of bones was placed in a separate labelled container for the cleaning process. There had been an issue with the decomposition box not draining appropriately, which resulted in some fairly heavy staining of the bones. Given the amount of time the skeleton had been in the box, I probably could have skipped the ammonia soak stage and gone directly to the hydrogen peroxide soak, but I did not want to cut corners now and end up with an issue later on when I was articulating the skeleton.

Step one in the cleaning process was to soak the bones in an ammonia solution, which helps remove any biological oils or residues from the bones. If the specimen was fairly fresh, they may need to soak for an extended period, but for my specimen an overnight soak was sufficient. Rinsing in fresh water afterwards revealed bones with fairly heavy brown staining but free from any remaining tissue or other contaminants from the decomposition box.

Step two in the cleaning process was to soak the bones in hydrogen peroxide to remove the brown staining. One important note about this step is that the claws need to be removed from the container and not exposed to the hydrogen peroxide as it would cause the collagen they are made from to get discoloured and brittle. After this soak is completed, it is important to rinse the bones in fresh water thoroughly and then set them out on layers of paper towels in flat drying racks to air dry for several days.

The next post in this series will discuss the beginning of articulation of the fisher skeleton as this lengthy project continues. 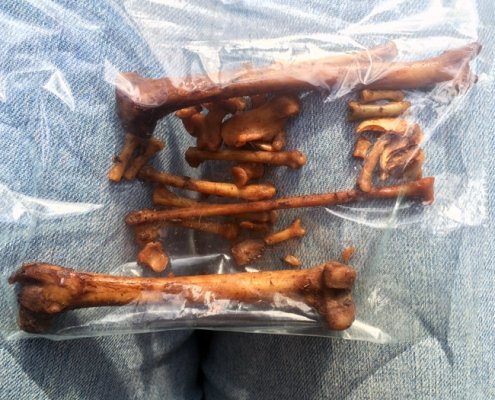 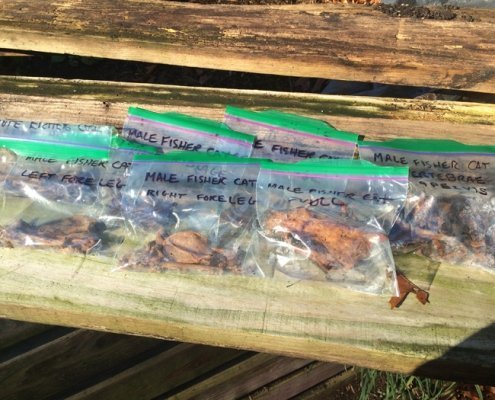 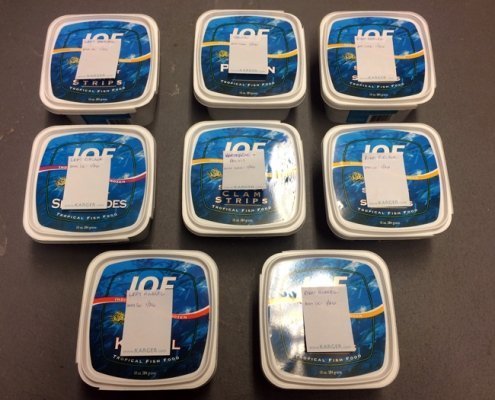 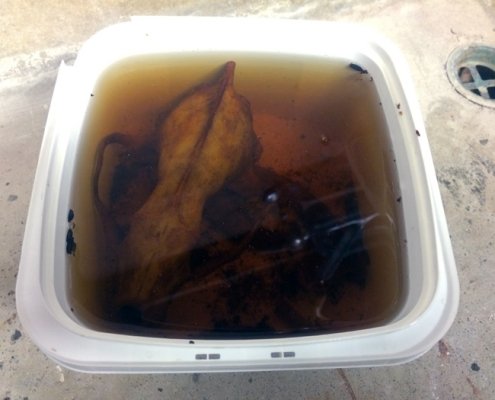 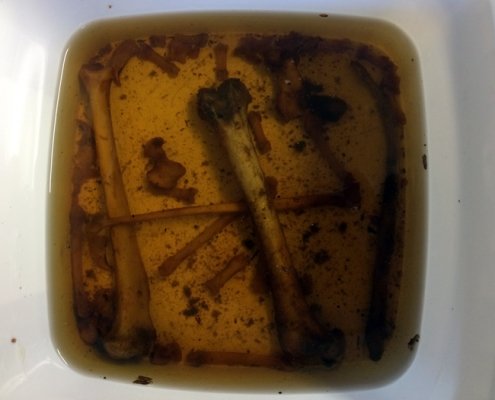 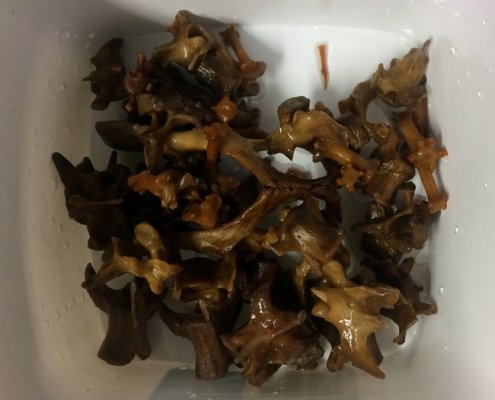 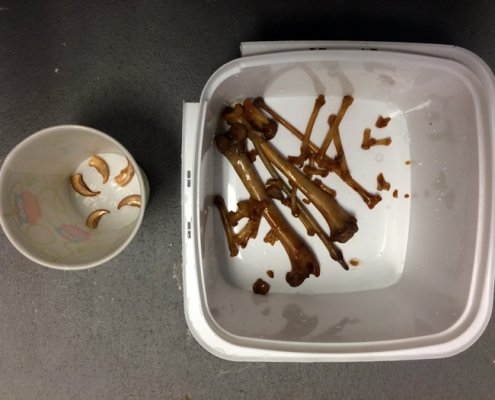 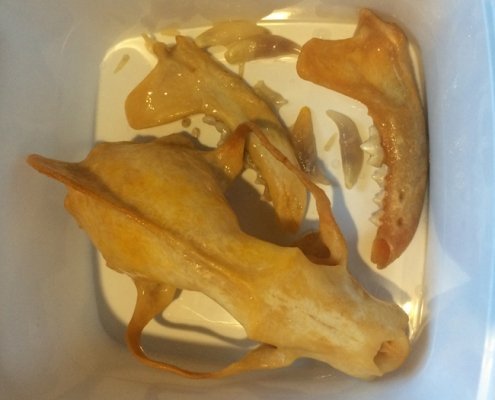 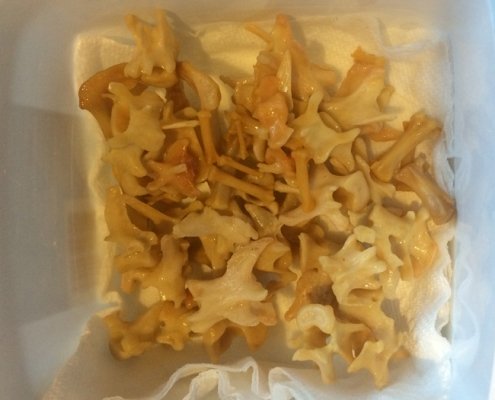 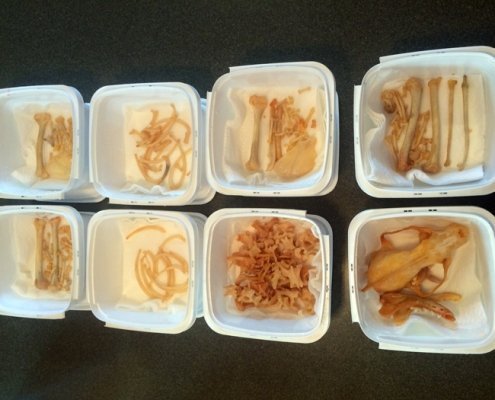