You are here: Home1 / Fresh Prints Art Blog2 / Musings and Other Stuff3 / Silver Linings, Finding Success From Almost Making it

Silver linings come into our lives in all kinds of interesting ways. Sometimes they emerge from the ashes of a dismal failure. Other times they sit quietly waiting to be discovered after being eclipsed by a more brilliant moment in time. No matter how they come to our awareness, we need to take notice because their messages are important.

I recently experienced both of these instances while blowing the dust off some illustrations I wanted to add to my website portfolio. Armed with a mug of herbal tea, I was digging deep into a digital archive of illustration files, looking for one in particular. During my search, I stumbled across several others in various stages of sketches or finished illustrations and I was unprepared for the upwelling of emotions they unleashed. I decided to share two of them here since they are both interconnected.

Thinking on my feet (literally) 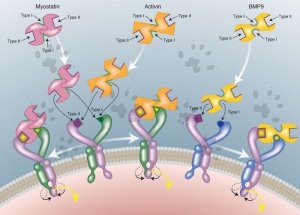 This illustration brought back memories of what would be my first in-person sales call. The meeting was a result of my first attempt at directly contacting the CEO of a large biotech company in Cambridge, MA. The meeting was with several high-level individuals, and I really wanted it to go well. This was a big step up for Inky Mouse Studios, and to say I was jittery was an understatement. I had thoroughly prepared for the meeting, but it was all the stuff that happened before the meeting even started that was almost my undoing.

On the train ride into Boston, I noticed the toe of my shoe was showing some wear and had started to separate. I made a note to myself to prioritize buying a new pair of dress shoes. I passed the time on the train reviewing my digital portfolio presentation and trying to utilize my new meditation practice to keep my anxiety at a tolerable level.

My client’s office was a short five block walk from the train station. After the first block, I noticed my shoe situation was deteriorating, the sole was now separated past the toe. I checked the time, wondering if I had time to stop at a shoe store and buy a new pair, but time was something I did not have. I carefully walked another 2 blocks before the inevitable wardrobe malfunction. I retrieved the separated sole of my shoe from the sidewalk, slipped it into my laptop bag, and was never more grateful for wearing flats. Hopefully, no one would notice the slight difference in footsteps as I walked the last few blocks without incident.

I checked in with the receptionist and sat down to wait for my appointment. My eyes settled on the table in front of me, looking for something to distract my mind. In the middle of the table were a couple of research journals, but not just any journals, they were Cell journals. Cell is a publication for all sorts of biological research and has a history of unusual cover art. While securing a place inside the pages of Cell is a big deal to researchers, ending up on the cover is a big deal to medical illustrators.

As my eyes registered the familiar layout of the cover, my mind whirled for a moment and I felt like life was taunting me. Here I was, on the verge of a very big deal, and I was face to face with something that at the time felt like a monumental failure. It happened so quickly I was a bit flustered for a moment. While I tried to collect my thoughts and calm the waves of self-doubt, my client arrived to escort me to the boardroom for our meeting.

With Cell still fresh in my mind, I pulled my laptop out of my bag. The prior wardrobe malfunction was forgotten until the sole of my shoe arrived onto the boardroom table with a muffled thump. I was snapped back to reality as I realized I wasn’t the only one to notice the hitchhiker. Without a moment’s hesitation, I retrieved the errant sole, and jokingly commented, “They tell you to be prepared for anything. Well, I wasn’t quite prepared for this little wardrobe malfunction this morning. Thankfully it’s not critical, so I’ll just deal with that later.”. I quickly stuffed the sole back into my laptop bag and everyone in the room had a chuckle about it.

With the ice now broken, the rest of the meeting passed easily. My anxiety melted away, and I put on a pretty good presentation. Afterwards, I walked out feeling upbeat and positive, and I barely even noticed the missing sole of my shoe on the walk back to the train. A few days later I successfully landed the job.

And the Winner is? 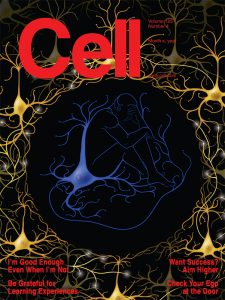 Mock up of a Cell journal cover I created an illustration for in an attempt to conquer new territory. Silver linings from illustrations, drawing on life experiences.

This illustration project came to me by referral from another medical illustration colleague and would be the first time I was handed a gift of a project, along with a glowing recommendation. The fact that my capabilities were deemed up to par was encouraging. The client was Kay M Tye, Ph. D. a prominent Associate Professor of Neuroscience at MIT, and the previous illustrator had managed to land her research on the cover of Cell not once, but twice, with some very unique illustrations. No pressure, right? The feeling that I had some very large creative shoes to fill, settled in almost immediately.

I generated several concepts which were reviewed and rejected. Eventually, a new concept was finally selected. The real work began with trying to conceal a human figure within the main illustration of a neuron while keeping both subjects visible and understandable. After several versions, I achieved the careful balance of camouflage and visibility. As I was putting the finishing touches on the illustration, I received news that the paper had been formally accepted. With the acceptance of the research paper, the pressure was on to make the cover. I completed the illustration which my client accepted and submitted for consideration for the cover, the wait began.

“Unfortunately, Cell chose an alternative design for the cover.“. Those words in a follow-up e-mail from my client stole the wind from my artistic sails as I read them. Don’t get me wrong, this wasn’t the first time, nor will it likely be the last time, one of my illustrations did not hit some elusive target with my intended audience. This illustration was generated out of hopes of landing my client on the cover of Cell, and since it ultimately did not make it there, it was difficult to not view it as a total failure on my part.

Sun or Clouds in the Forecast?

It has taken over two years for me to revisit the Cell incident. Staring at the cover of the actual volume of Cell I was trying to land on upended the mixed bag of feelings I was still carrying regarding that project. Now that I have had time to sort through them, I can pick out the silver linings that my emotions blinded me to. I am now aware that these insights are not positive or negative, they are simply steps along my path.

As new projects come along, they too will provide experiences that can help grow and strengthen my freelance illustration business and my capabilities as a medical illustrator. Between black and white are all these shades of silver, and those are the silver linings each and every one of us need to focus on in order to succeed. I urge all of you to keep looking for your own silver linings, they are there just waiting to be noticed.

Keep up the good work and draw on your experiences,
Wendy

The Art of Living and Working With a Cat

Skeletons In My Closet – The Fisher Diaries – Part 3
Scroll to top
Posting....